At the risk of tooting my own horn, it occurred to me during the last espn.com sports-uniform re-design contest that I'd had a decent streak of being named either a "winner" or at least getting an "honorable mention" (HM) in several of the contests.  It seemed to me like it had been as many as four or five in a row. So when I got another HM in this week's Detroit Lions re-design contest, I tried to figure out how long my winning/"honorable" streak might be.

And based on what I've posted on this journal, it looks like (going backwards in time), I was either a winner or HM for contests to re-design the Lions, the L.A. Rams, the Toronto Maple Leafs, the LA. Clippers, an aniticpated Las Vegas NHL team, the Portland Trail Blazers, the Charlotte Hornets, the Minnesota Vikings and the Miami Dolphins.

To my surprise, if my method of counting is accurate, my streak is up to nine contests in a row. Further, as near as I can tell, I've entered a total of 12 contests and been a winner or HM 11 times (striking out only with a Cleveland Browns design [that I thought was actually one of my better entries considering the limitation that you had to keep the team's current helmet -- and therefore couldn't change the color scheme]).

Unfortunately, I wasn't the only one to notice that I'd been getting a lot of attention in these contests.  Another  participants in the Lions contest, one who didn't get a mention, posted the following comment:

While it is in-line with how you run the site, I find your redesign contests very frustrating (and not just because of how I used the vertical stripes in a unique way and didn’t get mentioned. Well, that’s part of it.)

There were some really, really nice designs that did not get mentioned in the article at all. I imagine people put in a ton of time creating beautiful logos and uniforms and you just mentioned Tom Bierbaum’s work for the millionth time instead (no offense, Tom.) Again, I get it: you’re quirky and the site and the contests reflect that.

I enjoy seeing your winners, but I would also like to see a contest component where people other than you could vote on the designs to validate the designers’ efforts, kind of like those that Phil used to run.

We used to do voting/polls for my ESPN contests, but ESPN.com no longer has that functionality, surprisingly enough.

As I’ve made clear all along, contest results are decided upon by the Uni Watch Executive Committee, which has a membership of one. I appreciate everyone’s efforts (including yours, Bobby — thanks for submitting!). But effort in and of itself does not correlate with quality or interest. The designs that I choose to highlight are the ones that made the biggest impact on me. In this particular instance, that included a futuristic BFBS design, which hardly fits the “quirky” profile you’re trying to impose upon me.

As for Tom Bierbaum, he’s been relegated to the Honorable Mention section for the past two contests (or maybe three, I forget), so it’s not like I’m giving him a massive platform. But yes, I’ve liked his stuff, so I’ve continued to mention it. If he submits something I don’t like, I won’t mention it. That’s how it works: The stuff that I really like makes the cut; the stuff that I don’t like as much, or that doesn’t make as big of an impact on me, doesn’t. I don’t mean that to sound harsh — it’s just reality.

I was a little amazed to get singled out by this other entrant, and despite his saying "no offense, Tom," it's hard not to take it a little personally that he so specificalaly resented the attention my entries have been getting. And the key phrase there is "my entries." Paul Lukas doesn't know me from Adam -- 100% of what he knows about me is what I submit, and it's the content of those entries that's getting evaluated, not the individual making the entry.

But I will say, I feel genuinely and justifiably humbled to be compared in any way to the people with genuine professional-quality design skills like this individual and many other entrants.  They have abilities and polish I can only dream of and they use them to produce designs that are far more realistic and usable than most of my idiosyncratic ideas.

What I offer is not genuine, professional quality designs, but interesting, creative, innovative ways of looking at the world of sports-uniform design. And it's no accident -- alas, I have to say I'm not much of a fan of what's going on in sports design these days. Other than very conscious retro uniforms, most of what's being designed these days is, to my eye, just not very easy to look at. I have my own strong feelings about what makes for a good uniform (bold colors, traditional stripes and fonts, visuals that are fun rather than menacing, etc.), so I put a lot of effort into these entries because this seems like a chance to inject some of my alternate ideas into the discussion, making use of a forum where it might actually get noticed and considered.

So I work hard at these entries. And I'm not talking about the actual physical effort put into the artwork (which is considerable -- it's extremely time-consuming to execute these designs in colored pencils), what I'm talking about is the effort to brainstorm and kick around ideas until I come up with something that I think will stand out and have a chance to get noticed and mentioned in these contests.

The first couple of times I entered, I took a pretty straight-forward approach and submitted what would probably be my first choice for those teams. And that resulted in entries that looked like a lot of the other entries. I realized that for all that time and effort I was putting in, I wasn't going to accomplish much if what I submitted blended into the crowd, so I've been putting more and more effort with each submission into challenging myself and coming up something that's genuinely a little innovative and worth noticing.  And again, the point isn't to "win," it's to tilt at the windmill of current sports design -- maybe, just maybe, do a little good in terms of broadening the discussion and taking the sports world back to a day when its aesthetics weren't so exclusively calculated to appeal to the macho tastes of those most likely to purchase sports apparel

Yes, it's a real long shot, but one I think is worth taking, especially if I'm having a lot of fun in the process. 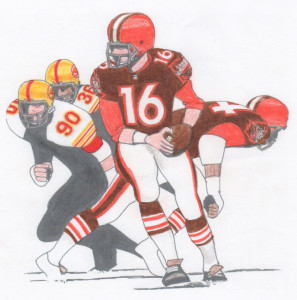 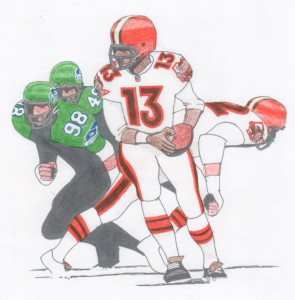 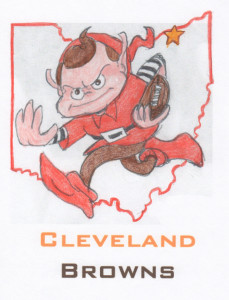 Here's a look at that one entry I can find that did not earn a mention in an espn.com uniform re-design contest. And it's actually one of my favorites, considering the limitations of keeping the team's existing helmet and color scheme. But I can see how I failed to really come up with something that was actually worthy of note, especially in the designs for the opposing teams. A little too much of what I'd personally like to see on the field and not enough of what could have made my entry stand out among the dozens of other submissions.
Tags: cleveland browns, espn.com, paul lukas, uni watch
Subscribe