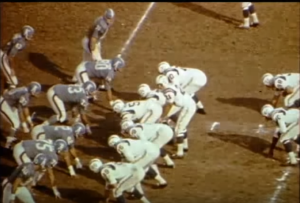 On YouTube a highlight film of the 1962 Houston Oilers popped up and I gave it a try, eventually pausing it at this point in the film. When I reopened the computer the next morning, it struck me that this shot epitomizes for me the best of the old AFL uniforms. These are actually the first two sports teams I adopted at about the age of 6 and very specifically because I loved their uniforms -- the sky-blue color of the Oilers with the white oil-derrick emblem and, of course, the lightning bolts on the Chargers' imaginataive uniforms. I eventually came to like even more the great Pat Patriot logo and flaming red jerseys of the Boston Patriots, but this visual sure brings back the sports aesthetics I first fell in love with.
Collapse