One more recent set of entries for an ESPN.com Uni Watch Uniform Re-Design contest, this one for the Tennessee Titans. In this case, I went with a favorite color scheme from the team's distant past when it was the Houston Oilers -- sky blue, metallic sky blue and red.  And there are a couple of my trademark cartoon-ish logos.  Here's the home version... 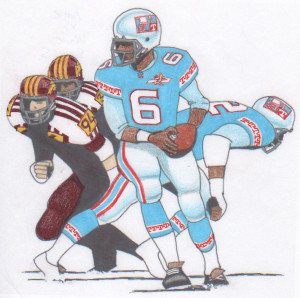 Catching up on the entries I've done for the last few ESPN.com Uni Watch re-design contests, here's what I came up with for the Las Vegas Raiders...

Cartoon mascot? Check. In fact, two of them.

Brighter colors? Check (though one could scarcely get any less bright than the Raiders' traditional colors of silver and black). 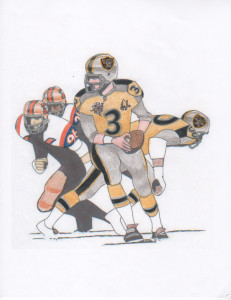 Note that I've augmented the old silver and black with Vegas gold. The opposing team is a Denver Broncos design that takes that team's orange and blue colors, adds metallic orange, uses the 1968-1996 helmet logo and combines the great shoulder panels of the 1965-66 uniforms with the number logo of the current uniforms.( Collapse )

Here are my entries in the recent ESPN.com Uni Watch contest to re-design the Jacksonville Jaguars...

As usual, I went for bright colors and a some kind of cartoon mascot... 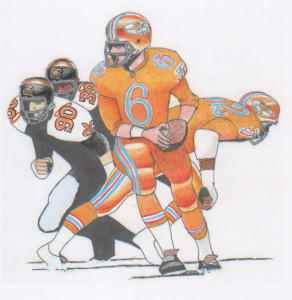 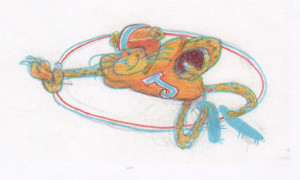 That's the home uniform, showing the Jags squaring off against the New Orleans Saints in a new Saints uniform that puts a gold halo on their helmets and includes the classic Saints mascot "Sir Saint" on the front of the helmets presenting the player numbers.( Collapse )

Here's another shot from that great snowy 1963 Patriots-Bills playoff game... 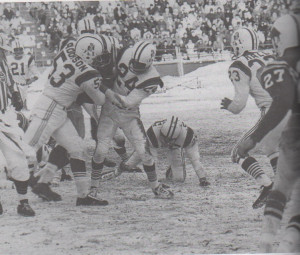 For some reason, this photo takes me right back to visiting relatives in Queens, NYC right before Christmas in 1963, though the game is in Buffalo three days after Christmas. Again, that almost impossible combination of a snow-covered football field when the sun is out makes it look the way I remember the snowy days up in New York City or at home on Christmas when I was a kid.

Oh, and for once I'll perform the important courtesy of attributing the photo, which I copied out of a greet book on the AFL history of the Bills, called "Rockin' the Rockpile," with this photo being credited to Robert L. Smth of Orchard Park, N.Y. I found the prior photo on a "Best AFL Photos" page on Pinterest, though I'm unable to track it down again.

Here's a nice Christmassy football photo featuring a couple favorite uniforms, the  Patriots and Bills of the 1960s... 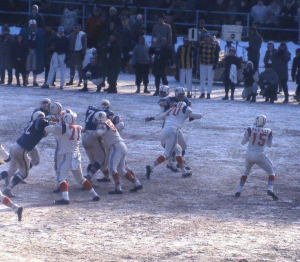 What makes this picture so special is the very rare occurance of a snow-covered football field on a sunny day. Since they keep the fields covered until game time, any snow on the field has to fall after the game starts. So snowy games are a rare occurence to begin with and  it's infinitely more rare to get enough snow to blanket the grass and then also get sunny conditions within the same game. This happened for least a brief period during the 1963 AFL East playoff, won by the Patriots 26-8 on Dec. 28, 1963.

We were living in Delaware at this time and got a rare white Christmas that year. Pictures from this Christmas week game sure take me back to what snowy days looked back then.

I really didn't start rooting a lot for these two teams until they went into decline in 1967 and beyond, but I now have great nostalgia for their battles that decided the AFL East title in '63, '64 and '66, in part because I remember decorating the Christmas tree one year when they were playing a vital game late in the AFL season.

Here's an entry that's much-delayed from last summer, when ESPN.com held its most recent uniform re-design contest, this time a challenge to overhaul the Minnesota Timberwolves (who I re-named the Minneapolis Timberwolves since I much prefer teams named after cities rather than states of regions).

This one was more of an adventure than usual for various reasons, but more on that in a minute. First I'll show you what I came up with, starting with the road uniform... 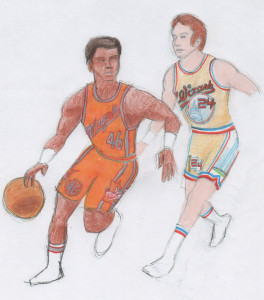 And then the home uniform... 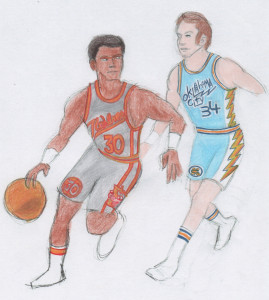 At the risk of tooting my own horn, it occurred to me during the last espn.com sports-uniform re-design contest that I'd had a decent streak of being named either a "winner" or at least getting an "honorable mention" (HM) in several of the contests.  It seemed to me like it had been as many as four or five in a row. So when I got another HM in this week's Detroit Lions re-design contest, I tried to figure out how long my winning/"honorable" streak might be.

And based on what I've posted on this journal, it looks like (going backwards in time), I was either a winner or HM for contests to re-design the Lions, the L.A. Rams, the Toronto Maple Leafs, the LA. Clippers, an aniticpated Las Vegas NHL team, the Portland Trail Blazers, the Charlotte Hornets, the Minnesota Vikings and the Miami Dolphins.

To my surprise, if my method of counting is accurate, my streak is up to nine contests in a row. Further, as near as I can tell, I've entered a total of 12 contests and been a winner or HM 11 times (striking out only with a Cleveland Browns design [that I thought was actually one of my better entries considering the limitation that you had to keep the team's current helmet -- and therefore couldn't change the color scheme]).

Unfortunately, I wasn't the only one to notice that I'd been getting a lot of attention in these contests.  Another  participants in the Lions contest, one who didn't get a mention, posted the following comment:

While it is in-line with how you run the site, I find your redesign contests very frustrating (and not just because of how I used the vertical stripes in a unique way and didn’t get mentioned. Well, that’s part of it.)

There were some really, really nice designs that did not get mentioned in the article at all. I imagine people put in a ton of time creating beautiful logos and uniforms and you just mentioned Tom Bierbaum’s work for the millionth time instead (no offense, Tom.) Again, I get it: you’re quirky and the site and the contests reflect that.

I enjoy seeing your winners, but I would also like to see a contest component where people other than you could vote on the designs to validate the designers’ efforts, kind of like those that Phil used to run.

There was another re-design contest run by the Uni Watch colum on espn.com, this time re-designing the NFL's Detroit Lions. Word is the Lions are going to overhaul their uniforms, with possibly new colors, in 2017, hence the contest. So I took as my starting point an imaginative and approrpiate new color scheme for the traditonally blue-and-silver Lions and came up with a combination of authentic lion colors -- tan/gold and brown -- combined with a light blue/silver hue as an homage to the team's traditional colors... 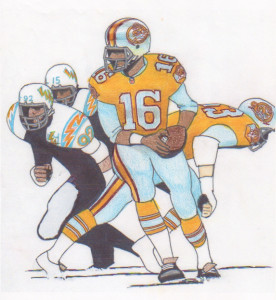 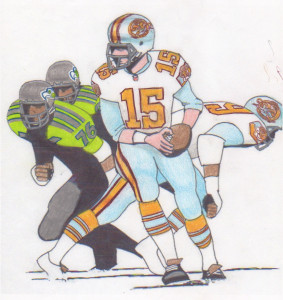 To this distinctive color scheme I added a cartoon Lion mascot featured on the helmet and shoulder patch. I searched the Internet for intersting, nostalgic styles, including good old Fred from the Super-Chicken cartoons, and found my inspiration in the cat "Choo Choo" or "Chooch" from "Top Cat," so I worked toward his style and added a mane, lion-shaped face and rounded lion ears... 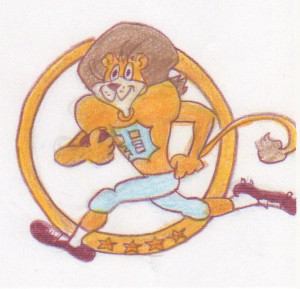 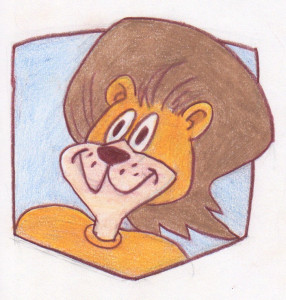 Backtracking a bit, in January, the great Uni Watch column on espn.com ran one of their re-design contests to come up with ideas for a new look for the NFL's Rams for their move back to L.A.  As usual, I had zero spare time to devote to the contest but managed to put in a few late nights and got something in... 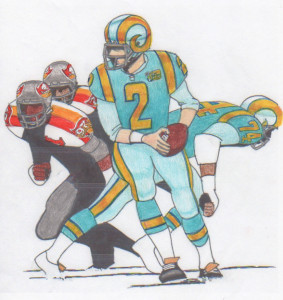 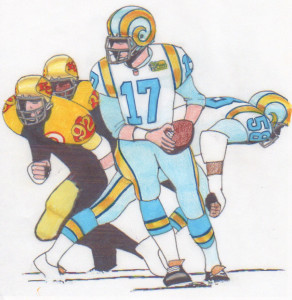 As is often the case, I wasn't very interested in any cutting-edge design elements other than a color scheme that would really pop and would grab the eye of viewers as the Sunday highlights were playing (especially potential fans for whom the macho black-and-darker black color schemes and snarling mascots hold little appeal). And there are few color schemes I like more than sky blue and gold, which are not that far off of the team's traditional blue-and-gold/yellow colors and to me seem quite appropriate for a team trying to re-establish its California identity.

It was just a couple days ago that I learned the distressing news that hockey’s Toronto Maple Leafs are reportedly re-designing their uniforms for next season as part of a celebration of the team’s100th anniversary. I found this distressing for two reasons – first their uniform is my favorite in the NHL by a mile and it will be crushing to see any sort of trendy re-design of a truly classic uniform, and second because the news motivated ESPN.com’s Uni Watch columnist Paul Lukas to announce a Maple Leafs re-design contest and it seemed impossible that I could participate.

In addition to having little enthusiasm for re-designing a uniform I love, the demands of my job have been pretty brutal the past couple of weeks, leading to a condition of physical exhaustion that’s put me behind on all kinds of commitments, including just about any holiday activities this Christmas season.

So a couple of times I made the firm decision to just skip this contest, but nevertheless found myself still kicking around ideas and sketching potential logos. Things like an impossible deadline and an unappealing assignment can sometimes really unleash the creative impulses – what have you got to lose? -- and before long, I found I had enough interesting ideas ratting around that I had to invent the time and get those ideas down on paper.

So here it is, my reluctant re-design of the Toronto Maple Leafs… 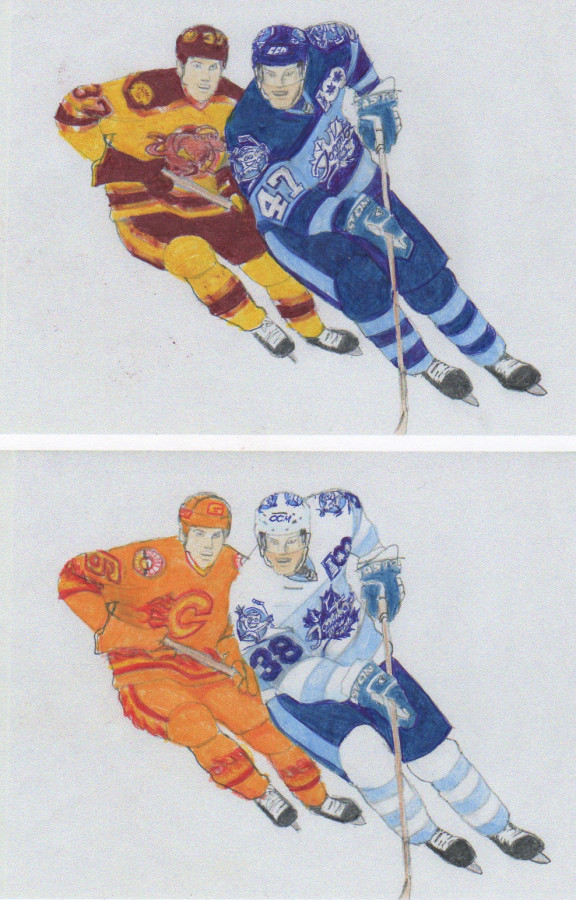