The Uni Watch column at ESPN.com had another uniform-design contest, this time to come up with a team name and uniform for the rumored Las Vegas NHL expansion team.  What I came up with was a reference to Nevada being the "Silver State" and the fact that a hockey team generally has six players on the ice at a time (barring penalties) -- the Las Vegas Silver Six. 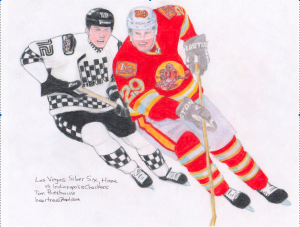 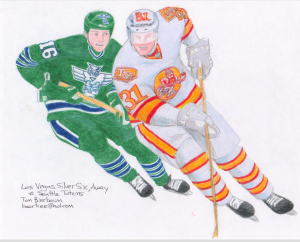 As usual, I wanted some striking colors that would really stand out and be unique within the league's current palette, so the Silver Six uniforms are gray / silver with burgundy and a gold / orange color.  Also as usual, I wanted a fun mascot kind of characxter, so their logo / chest emblem is a silver knight playing hockey with his sword fashioned into a hockey stick. 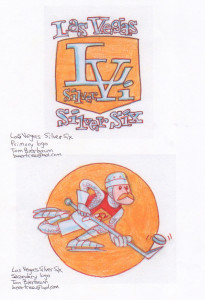 I was having trouble coming up with a team name / identity that I was especially happy with, but when I started toying with a Roman numeral "VI" with the "L" from Las Vegas turning into a hockey stick and the dot of the "I" turning into a puck, I decided the "Silver Six" was meant to be.

An Oklahoma-based fantasy football player invited readers of espn.com's UniWatch column to submit designs for a hypothetical Oklahoma City NFL franchise, since there's been some chatter that Oklahoma City is emerging as one of the more viable homes for a re-located or new team.  The organizer has picked a team name, the Oklahoma City Roughnecks, but I decided right off that I was going to violate the rules of the contest because I just don't like that name much and I've had an Oklahoma City team in my mind for 45 years.
So behold, your Oklahoma City 89ers... 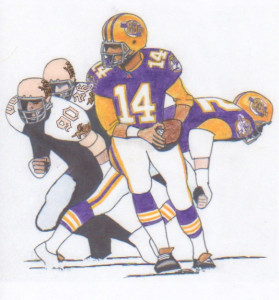 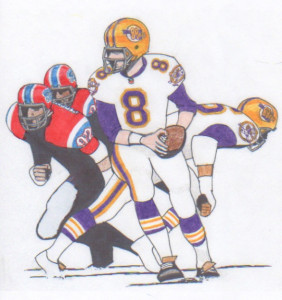 The name probably sounds funny to most ears, but the old minor league baseball team from Oklahoma City used to be called the 89ers (after the people who rushed into the state when it was opened to settlement in 1889) and I actually saw that team play at the Tacoma Cubs in old Cheney Stadium in the summer of 1968 as a field trip with my Colt League baseball team. For whatever reason, I was fascinated by that visiting team, the city and the name, so that fall, when us Bierbaum kids decided to "add" expansion teams to our pretend pro football league, I came up with the improbable idea of creating an Oklahoma City 89ers in the pro ranks.

The Uni-Watch column at espn.com ran another re-design contest, this time addressing the NBA's Portland TrailBlazers, and I once again managed to place among the "winners" that got recognition from the Uni-Watch columnist Paul Lukas.  Here are the designs I came up with... 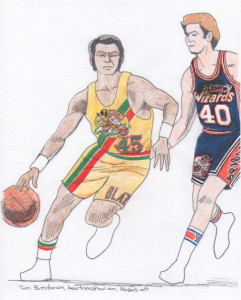 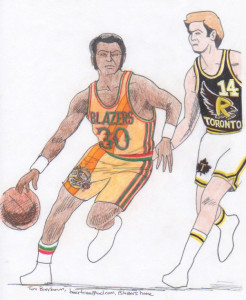 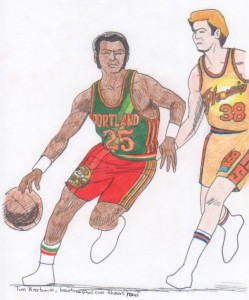 When daughter Emma elected to go to Ohio State last spring, I thought I'd thank the school by coming up with a nice re-design of Ohio State's football uniforms, but life being what it is, I never got around to working on it until well into our Christmas break.  So I pulled out the old colored pencils and took a couple half-days and managed to get my ideas down on paper.  Now, I think the Buckeyes have one of the better current designs in the college ranks, but I've always felt there was room for improvement. 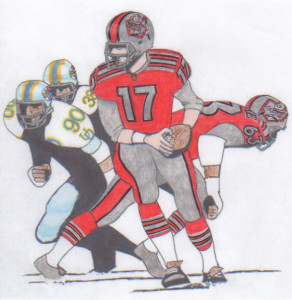 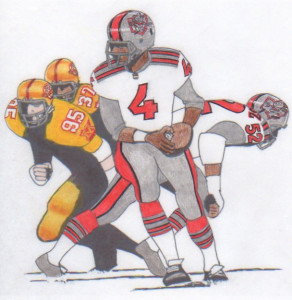 There's another re-design project being run by the Uniwatch column at espn.com, this time coming up with ideas for the soon-to-be restored Charlotte Hornets NBA team.  Here's what I came up with... 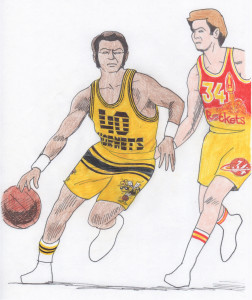 And here's the logo I created. 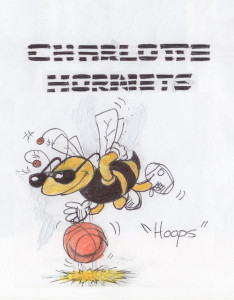 As usual, my design combines an essentially traditional look with bright colors and some fun touches like a cartoon mascot. To me, the yellow-and-black colors seem almost inevitable, though I gave my yellow an orange-ish tint to give the thing a litlte bit of a distincitve feel.  Obviously I tried to work in black-and-yellow striping wherever possible, including in the numbers and lettering.   The stripe on the trunks is inspired by the Seattle Sonics of the late 1960s and early 1970s, who had, in my opinion, one of the best basketball uniforms ever.  I put the jersey number over the wordmark because my lettering style took up a lot of space horizontally and I couldn't fit "Charlotte" or "Hornets" above the number.

I gave the mascot, Hoops the Hornet, a few distinctive touches, including sunglasses that create the requisite over-sized eyes and little basketball-shaped deely-bobbers.

OPPOSING TEAMS: The home Hornets are facing an interesting version of the Houston Rockets, who are wearing a design that occurred to me the minute I imagined the Rockets taking on the red-over-yellow scheme of a team we made up back in about 1969.

The road Hornets are playing a version of the Dallas Mavericks uniform I submitted to Mark Cuban's contest.  I kept that home Mavericks uniform white, one of the very few times I've used white in one of my NBA re-designs and decided here to see how the design looks with the white being replaced by a light shade of the uniform's lime green color.  It's OK, but the pencil I use for that green color is just not quite bold enough to pull off the effect I was envisioning.

Here's my entry in the uniform contest being run by Dallas Mavericks owner Mark Cuban... 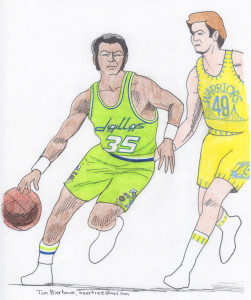 I came up with a wordmark that turned the "A's" in "Mavs" and "Dallas" into little cowboys, then added a mascot on the trunks that's a cowboy dribbling the ball down the court. I was envisioning a gold-and-brown color scheme that for me would have fit the maverick theme, but Mark wanted to see designs in colors similar to what the team has worn, so I took its former green-and-blue colors and livened them up with a bright lime green.  One thing I usually go for in my designs is eye-catching color (I shoot for schemes that would make the team instantly recognizable during SportsCenter highlights) and this was where my instincts took me.  Very reminiscent (though not intentionally) of an alternate uniform the Atlanta Hawks wore in the early 1970s.

OPPOSING TEAMS: Facing the home Mavs is a re-worked version of the Miami Heat. I wanted to try a sky blue-and-orange color scheme and I decided I couldn't let the dreaded singular team name "Heat" stand, so I renamed the team the Miami Oranges. Of course, no such makeover is remotely possible, but it's fun to imagine a world where such a thing could actually occur.  (My brother Bill designed a football team back in 1967 called the Florida Oranges and I take my inspiration for this team name from that.) The road Mavs are facing the San Francisco Warriors in a re-design loosely based on their great uniforms of the mid 1960s, complete with trolley car on the shorts.

In illustrating my Seattle Sonics retro concept a couple months back (http://tombierbaum.livejournal.com/11144.html), I tossed together for an opposing team an idea for the Indiana Pacers that I really liked and I decided I had to give that concept center stage in its own entry. 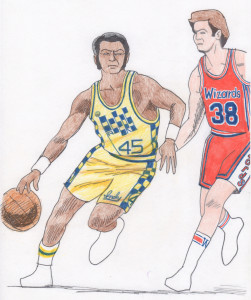 The starting point was remembering a toy race car I had as a kid that was a light gold color and had a couple stripes of black-and-gold checkers. That design flashed into my head and I quickly realized it best fit the Indianapolis Pacers (as I did with the Minnesota Vikings, I'll rename my re-designed team after the city, following what used to be the consistent practice, rather than naming the team after its entire home state). As I thought through this design, the idea of a "Pacers" logo that looked something like a checkered flag popped into my head and after a few sketches, I came up with a version that, at first glance, actually looks like a checkered flag.

Here's my second submission to the Minnesota Vikings re-design contest being run by the Uniwatch column at espn.com. This one is a little less radical than my light purple / metallic light purple design from the prior post, but once again I'm modifying the Vikings colors to make the purple more vibrant and distinctive. In this case I'm going with a magenta shade of purple and an orange-ish yellow for what I think would be a color scheme that would "pop" a lot more on TV than what the team currently wears.

Another re-design contest by the Uniwatch column at espn.com, this time to re-design the Minnesota Vikings. And my submissions are pretty out there.

I did two full sets this time because I'd coincidentally done one already that I like a lot but didn't feel would particularly stand out in a contest. Meanwhile, I'd just been thinking about another approach to the Vikings, one that felt like it would stand out a lot more, so I spent much of Easter weekend with the colored pencils illustrating that additional Vikings concept.

And the Easter weekend was appropriate because, as you can see, it's pretty much what you'd get if you crossed the Minnesota Vikings with an Easter egg -- a very pastel take on the Vikings' traditional purple-and-gold colors.

I had a pretty good week on the great sports uniform blog Uniwatch. On Saturday, March 10, I stumbled across an article on the Indianapolis Star website about how the Indiana U. Hoosiers had declined to participate in Adidas' infamous "Fruit Stripe" basketball uniform program and stuck with their "classic look," and that article become the focus on the next day's main Uniwatch post (which included a "hat tip" to me) and then on Monday, the regular Uniwatch blogger, Paul Lukas, returned and again mentioned what a good article it was that I'd pointed out.

And then a couple days later, Paul ran his EPSN.com column about the Miami Dolphins re-design contest (http://espn.go.com/blog/playbook/fandom/post/_/id/19559/uni-watch-readers-redesign-the-dolphins) and my humble entry was one of the "winners," picked as best mascot character for my "Sunny" logo.  Paul wrote...
( Collapse )
Collapse