And here's an entry on the Uni Watch blog covering a lot of their case for the name...

Several years ago, Uni Watch had a re-design contest to rename and redesign the Cleveland team, and my entry -- less inspired than the Municipals -- was a version of the old hockey team the Cleveland Barons... 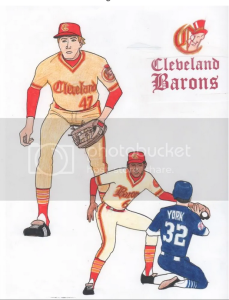 And here are my notes from back then...

The great sports-uniform blog Uniwatch.com is having a contest challenging people to re-design baseball's Cleveland Indians and football's Washington Redskins with themes that make no reference to native Americans.  For the Indians I went with the name of a couple old hockey teams, the Cleveland Barons, and adapted a color scheme, maroon and copper, that I'd lifted from a beautiful midget race car that ran in the Bay Cities Racing Association back in the early 1970s that I then adapted to a football-uniform design a few years after that. It would be a very distinctive color scheme in the current major leagues and I think a "rich," traditional combination for a team called the Barons. I went with a kind of light gold color for the road uniforms, a choice many traditionalists will probably hate, but I loved the different-colored monochrome road uniforms of the 1960s, 1970s and early 1980s [Padres' tan, A's yellow, light blue for many teams and especially the navy blue for the late '70s White Sox]).  It's hard to see, but I also went with the increasingly popular retro color of cream color for the home uniform. The logo combines one of the old Barons hockey mascots with an Old English font (technically called "Cloister Black").

The opposing road team is a concept for the Washington Nationals that's very close to one of my all-time favorite designs, the late 1970s White Sox monochrome navy road uniform.
Collapse